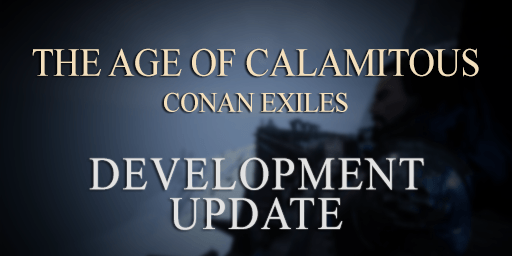 We have an important announcement to make regarding the RP-Addon for The Age of Calamitous mod for Conan Exiles.
As some of you’ve probably seen, we’ve included new Server Settings that can be adjusted through the AoC Admin Panel.
These settings will allow you to tweak the difficulty curve of the AoC content to your liking.
See below for more details.

With the implementation of the new server settings, we’re moving towards removing the RP-Addon.
This Mod Addon has worked as a way to reduce the difficulty of the mod content.
With this new update, you should be able to tweak the settings to your liking instead of having to download another mod.
However, right now, only the difficulty parameters can be changed while the crafting changes cannot.
We are working on building a new feature for the Currency aspect of AoC, which should allow you to use the ‘Crafting Cost Multiplier’ setting.
This is a vanilla server setting that hasn’t been compatible with AoC due to conflicts with item conversion.
If we’re able to achieve this feature, the ‘Crafting Cost Multiplier’ setting can be used to lower the cost of AoC recipes.
Do note that the RP-Addon will not be removed until all features are set up correctly.
Once done, tailoring your AoC experience should be much easier and faster than having to rely on an extra mod.

For the time being, you can find the new server settings in the AoC Admin Panel.
Here’s a quick rundown on how these work:

With patch 3.52, we introduced the Soul Essence feature.
This is a feature that is currently in development, but one that we had to push out early due to the game update.
Soul Essence controls the amount of magic you can use before exhaustion.
It replaces the previous Stamina bar with the Soul Essence bar, which is centered above your action bar.
Right now, the Soul Essence has a preset amount that can’t be changed.
However, if everything goes according to plan, we’ll be implementing a new server setting for Soul Essence in the next patch.
This will allow Admins to adjust the preset values of Soul Essence.

– Future Plans for Soul Essence
We don’t usually share future plans for content as it may not be included in the final iteration,
and we don’t want to promise anything we can’t deliver on.
With that said, a lot of you want to know if the current state of Soul Essence is the finished result.
The short answer to that is, no. This is just the first iteration of this feature. We will continue to work and expand upon this with the coming updates.
We hoped to have more established by the time the patch went live, but due to the circumstances, that wasn’t a possibility.

We are working hard on getting the next patch out as soon as possible.
Stay tuned for more information!
Best regards,
– AoC Team